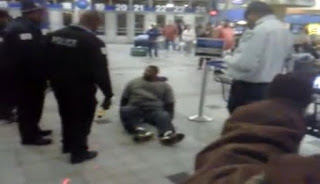 Scott's Tip Of The Day: By now you have probably heard about Alec Baldwin's latest freak out. That guy sure loves his Words With Friends.

While I don't agree with his behavior I agree with his sentiments that the flying experience is becoming more and more like traveling on a Greyhound Bus. Greyhound found this repugnant and responded to Alec Baldwin's comments.

I felt Greyhound's comments to be a little disingenuous when they said “I don’t know if he’s ever been on one of our buses (it doesn’t sound like it), but there are about 17.6 million people who travel with us every year who I’m sure wouldn’t share [his] feelings.”

So what did I do? The only thing I could do. I wrote to Greyhound.

I recently read about the Alec Baldwin Words With Friends debacle. One of his comments compared American Airlines to the "Greyhound Bus Experience."

One of your publicists responded:

“I don’t know if he’s ever been on one of our buses (it doesn’t sound like it), but there are about 17.6 million people who travel with us every year who I’m sure wouldn’t share [his] feelings.”
First, I would like to say I am an upstanding citizen. I have never been arrested. I am a successful attorney, I am highly educated and I adhere to social norms. I have travelled on Greyhound on many occasions and I think I can accurately articulate how America feels about Greyhound....

The 17.6 million people who travel on Greyhound do not enjoy this experience. Your publicist has either been misinformed or he is lying. As Dave Attell once said "You've been to a bus station, it's kinda scary. People walkin' around dirty, wearin' rags, babblin', shakin', droolin'. That's why no one ever blows up a bus station. They get down there, they look around, they're like 'Damn! Someone's already done this bitch, let's get outta here!"

I know you work in a corporate office and you probably don't often venture into Greyhound bus stations, but I can confirm that this is an accurate description. There are homeless men. It smells like pee. You can't use the bathroom unless the man behind the counter buzzes you in. When you get on the bus things don't get any better. If you are in the northeast you might get lucky and find yourself on a bus with mostly college students. If you aren't lucky you end up on a bus with a lot of low class winos taking their welfare check to cash in at Foxwoods Casino. No, I am not exaggerating. I have seen these people. They don't shower, they wear very old clothes and they smell of alcohol in addition to body odor. They stare at me and say things I don't understand. (I don't understand what they are saying because they are not only drunk but they are missing a lot of their teeth too.)

People travel on Greyhound for a variety of reasons. The main reason is it is cheap. Your customers need to go somewhere but they can't afford to buy a plane or train ticket. The second reason people travel on Greyhound is because all train routes on the available route have already sold out. There is a romanticism about driving cross country. Not on a bus. Not unless motion sickness is a romantic notion.

Nobody likes Greyhound but it's a necessary evil. But let's call a spade a spade. Don't insult my intelligence and tell me your travel experience is great. When people are afraid to fall asleep on your buses, that means it's not fun.

I hope you appreciate my input and consider some of the things I have said. But, I am realistic. I doubt you will. But please do me a favor. The next time you take a ride on a Greyhound, sit next to the smelly wino. Take a nap. Then email me back a full report of what happened. I just hope your butt doesn't hurt too bad.


I will let you all know if they decide to respond. Stay tuned.
Posted by Scott at 10:36 AM 8 comments: