And The Winner of Scott's Tip Of The Day Schmuck Of The Year Award Goes To......

Why none other than Hilary Swank!

Yeah, she only spells her name with one L. She didn't graduate highschool. Spelling wasn't her best subject. Apparently, social studies wasn't either. Hilary Swank recently accepted $1.5 Million to appear at Chechnyan President, Ramzan Kadyrov's, birthday.
Oh sounds like fun, right? No! Not at all! Have you read about this dude? His military units allegedly routiely engage in torture,rape and genocide. He is allegedly responsible for the murders of many reporters. He is also allegedly a big fan of honor killing. What's honor killing? When your wife leaves the house with short sleeves and you kill her because she has embarrassed you and brought shame to your family. "HOW DARE YOU WEAR SHORT SLEEVES, WIFE!!!! HOW DARE YOU!!!!"

So Hilary, way to go. You accepted $1.5 million to appear at Ramzan's birthday and kiss his ass. Clearly your handlers and you did no research on the man. You fired your manager and your PR team dumped you. You are just as bad as Beyonce, Usher and Mariah Carey. What did they do? They partied with Gadhafi's son at his 2010-2011 New Years Party.

Some people will do anything for money. Hilary Swank, you're an imbecile. You set a bad example for kids and you kind of look like an ape too. 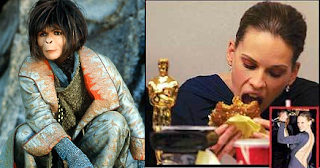 Well, congratulations Hil. You are the winner of STODSOTYA 2011!
Posted by Scott at 7:53 AM

I hope I never end up receiving one of your Schmuck of the Year awards. I better watch out.

thats quite the award