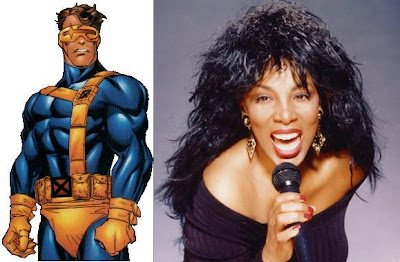 Scott's Tip Of The Day: Most people don't realize that X-man Scott Summers, aka Cyclops, is twins with disco diva Donna Summer. Donna Summer, although not a member of the X-men, is also a mutant. (She dropped the last 's' off of her last name in an attempt to distance herself from her controversial mutant roots). Her super powers include the ability to make gay, middle aged men dance uncontrollably, merely by singing.
Posted by Scott at 7:47 AM