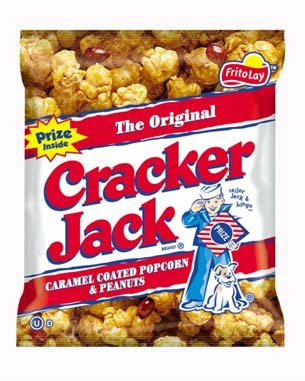 Scott's Tip Of The Day: Ever eat cracker jacks? What did it say on the box? "Toy Surprise Inside!" Those words used to be alluring. Secret decoder rings. Parachute army men. Who knew what lay inside that box of caramel corn and nuts? But times have changed. Now it just says "Prize inside." What happened to the toy? Plastic? That's too expensive. Now you get a tiny piece of paper with a joke on it. They don't even give you a temporary (or permanent) tattoo! A piece of paper! With a joke! What kind of prize is that!? I could make a better prize with a piece of ABC gum and a paper clip.

The next time you go to the ballpark and you're thinking about Cracker Jacks, get a hot dog instead. Hell, buy two. There might not be a surprise, but if you eat too many hot dogs, then one day you'll come down with cancer from eating too many nitrates. And when you do, you'll go to the hospital to get treated. You'll be lying in bed and one of your friends will come in with a nice card and some Mylar balloons. And you know what? That's way better than a Cracker Jacks prize.
Posted by Scott at 7:50 AM

Chewed gum and paperclip indeed make wondrous toy. But only if masticated by the Great Scott himself. And I do believe hot dogs have been known to provide nail clippings or rat hair. Is that not prize enough? Such disdain for our American culture...tsk tsk tsk

The price of corn must really be putting a strain on their toy division.

hahahaha.
That made a lot of sense.

You're right bro. That shit is so lame, I had to take an old toy from my basement and put it in the bag when my kid wasn't looking.

Cracker jacks AND cereal! What happened?! Are cheap trinkets all that expensive now a days? In Breakfast at Tiffany's they get some tin ring (or something...)! Now way do you get anything as cool now.

So the boyo buys cereal in accordance to if there's a toy inside and the last time we went shopping, he got nuthin'! Why??? No cereals with toys in them, that's why! What is this country coming to?? I ask you!