Things Aren't Always What They Seem 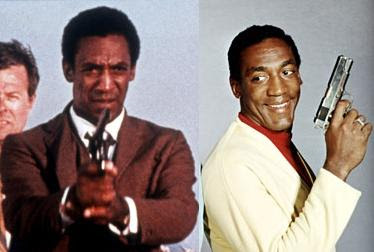 Scott's Tip Of The Day: Things aren't always what they seem. Everyone assumes Bill Cosby is a cheerful guy because he starred in the popular sitcom "The Cosby Show." What people don't realize is Bill Cosby shoots people in cold blood for fun. Just look at these pictures of Bill from the 60's. The picture on the left was taken at Altamont Speedway December 6, 1969. If you think that concert was cut short because of a "stabbing" you are surely mistaken. The photo on the right is a photo I "found" on Bill Cosby's dresser, when I was taking a "tour" of his house. Remember, things aren't always what they seem.
Posted by Scott at 9:30 AM

I Spy... Bill was a bad, bad man!!!! Tennis my ass! You and Robert Culp never fooled anybody.

I think Cosby was one of the Hells Angels.