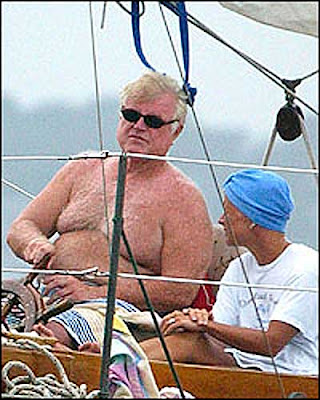 Scott's Tip Of The Day: Now that the manslaughtering drunk died, Congress appears ready to make a new push toward health care reform. Of course. All of my doubts were washed away when the world's third favorite Kennedy died. Suddenly health care reform is a good idea!....BUT IT'S NOT!
I urge you to think twice about health care reform. Not because America's spending is already completely out of control. Not because America can't effectively manage Social Security or Medicare. Not because I don't think it's right that my taxes will go toward paying for lung transplants for a douche bag, who exercised awful judgment when he smoked four packs of Newports a day, for forty years. So why then?
Health care for everyone means everyone's going to be healthier. People are going to live longer. The line at the CVS pharmacy counter is going to be bats**t crazy long. Highways are going to be jammed up with old people, hopped up on Viagra, heading to the assisted living center for a quickie before the early bird special at the Brown Derby. Is this what you want? Is this the American dream? NO! SAY NO TO HEALTH CARE REFORM!
Posted by Scott at 3:18 PM

Are you being serious or sarcastic? Because if you're being serious, I might have to take out my frustration on you for being rejected for the third time for health insurance just because I have NF1, which has given me NO PROBLEMS my entire life. I am sick of America's shoddy system and I need something better.
Whatever you've been told about health care reform is an exaggerated lie. Because the government sees fit not to tell the truth about anything.

If you take everything I say 100% seriously, then I think I have a bridge in Brooklyn I can sell you

I think you are right the health care reform is not a good way for us..

thanks for the chuckle.