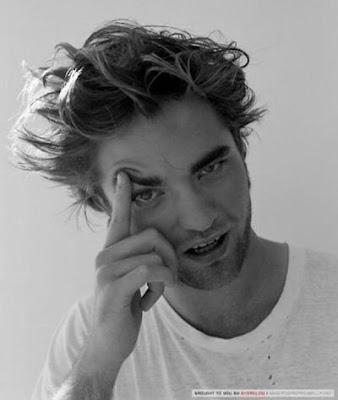 Scott's Tip Of The Day: The past few months I've heard enough about Robert Pattinson to last me a lifetime. Honestly, what's the big deal? He looks perpetually stoned. Can you brush your hair please, Robert? I'll buy you a brush. I will brush it for you. Jesus man. You look like a vagrant. Pattinson kind of looks like he came down with a bit of down syndrome too. Girls go crazy over him. US Weekly and all of those awful magazines won't stop writing about him. And why? Because of Twilight? Seriously?

What's with this obsession with vampires? One of the first appearances of a vampire in modern culture was the film "Nosferatu." It's a known fact that the vampire is supposed to be a jew on the wild. Driving the townsfolk crazy. Watch out for the Jew! Ah antisemitism. Thank you F.W. Murnau for propagating stereotypes and using the art of cinema to hate on the Jewish people. The big hook nose on Nosferatu? Yeah, not a coincidence. I'm not making this up! I'm not a paranoid. I learned this from a lezbo (not lipstick, unfort) film professor in college. She's not the only one who wrote/lectured on it. Google it. It's a fact people.

Lets put antisemitism aside for a second. Lets face it. Vampires are pretty stupid. "Roar! I'm really pale! I dislike garlic and wooden crosses. I suck blood. I am very strong." Sounds pretty retarded. Retarded! That's what vampires are. Retarded...

Why are vampires retarded?
-They don't come out in the day. This is probably not due to the fact they can't tolerate sunlight, but attributable to the fact vampires are afraid to be mocked and ostracized for their mongoloidian appearance and unrefined mannerisms. Think Boo Radley.

-They have irrational fears of garlic. Really? It will stink up your breath (I can't really criticize them them for their fear of religious symbolism. Religion scares a lot of people. Even religious people.)

-They drink blood. Totally a retard move. That's not apple juice in my veins! Stop drinking it! I need that to live, stupid!

Maybe Pattinson was a good choice for the role of a vampire? A retard playing a retard! Perfect. Call me insensitive. Call me an assh**e. But I didn't write the movies. I didn't direct them. I didn't invent vampires. I just educated the world about them. My advice? If you wanna read about a mongoloid read To Kill A Mockingbird. If you wanna watch one on TV watch Richard Simmons dancing to the oldies. Twilight? It's not for you. Give it a rest. Leave it alone. Let someone else watch it.
Posted by Scott at 1:30 PM

I agree! I have never understood this obsession with vampires...

lol. I didn't even know who this douche was and what he had to do with Vampires till the end of the first paragraph when you said "Twilight" Then I wanted nothing more to do with the post. =p But I kept reading it anyway.

Seriously, what is it with this movie? All the teenage sex? (don't get me started on that) The pale weird chick getting some vampire ass, or whatever?

This goes to show you how stupid and impressionable people, especially young people, are. Give them a douche looking guy, and a sort of hot chick, throw in a mediocre plot line stolen from a book, that was probably great, but was watered down for this ignorant youth, and BAM! Multi-million dollar grossing gold. Distract them with pretty people and vampires and shiny things.

And really, anyone who doesn't like garlic is pretty retarded in my opinion.

You MUST watch what you say about Robbie P. His fans are effing nutzo!!! I STILL get hate mail from crap I wrote about him a year ago!

But the best part about his retarded tween fans is their blog comments.

S's become Z's. Letters become numbers. Sentences become retarded. It's all too much for me!

I don't really care for Vampires or books or movies about them. And the Movie Twilight wasn't that impressive. However, I did enjoy reading Dracula in college which, surprised me.

Vampires are so last season, its all about wolfs in 2010